I have to begin this product review with a bit of a confession: I hate the taste of coffee and have never had a shot of espresso. That may perhaps make me the least-qualified reviewer in history of an espresso maker.

With that out of the way, I am quite good a plugging things into my car’s 12 volt power outlets (currently I am asking my car to power a radar detector, iPhone, and a dashcam that I’m testing) and do enjoy drinking lattes from time to time (as long as they have enough caramel and/or sugar). And hey, what’s one of two main ingredients in a latte? Espresso, of course. So I made a few lattes with it, but with hot milk and not steamed milk. 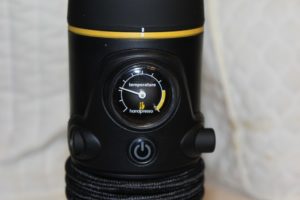 Now that we’ve established my bona-fides for reviewing this thing (or not, and you’ve closed this tab in your browser), let’s get another thing out of the way: I really cannot figure out why someone would want to use something that makes scalding hot beverages in your car that you have to pour into a teeny, tiny cup in your car while you’re driving.  Seriously, how is that a good idea?  I was skeptical when I first heard of the concept and remain skeptical after having used it a few times.

There aren’t really instructions about the proper place to set up the Handpresso Auto (where to be when you pour the water, etc.), but the safest place is probably inside your house over the kitchen counter. However, the instructions say that you should have the Handpresso Auto plugged in to your car’s 12 volt outlet before adding water. The first time we tried the Handpresso Auto, my wife handed the pouring and preparation duties from the front passenger seat while I drove; the second time, I added water in the house the night before my morning commute. Both yielded the same results.

To make a cup of espresso with the Handpresso Auto, it’s really quite simple: 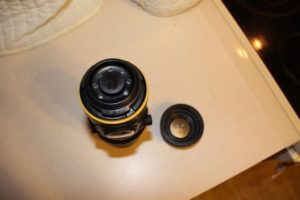 That’s all there is to it. Very simple, and the lattes that we made tasted almost like Dunkin Donuts lattes, but without the steamed milk (the texture was different, but the flavor was roughly the same). As it runs, it makes a whirring sound as the water is heated and the interior of the Handpresso is pressurized. I had to wait for one straightaway when my wife was pouring water into the Handpresso Auto, and for another when she was pouring hot espresso into a cup. Since it was becoming a latte and not just espresso, she poured it into a travel mug filled with hot milk. Nevertheless, despite the larger “target,” there was a bit of mist from the final pulse of liquid that missed the cup.

Physically, the device itself is extremely well built. If I were reviewing a car instead of an espresso maker, I’d make comments like, “the gauge was easy to read,” and “it felt like it was carved of a solid block of steel,” and “panel gaps are incredibly snug and consistent.” Well, it’s not a car, but all three of those statements are still true. It’s far from cheap ($199 on Amazon.com), but I don’t think I would want to have a cheaply made espresso maker sitting in my car’s cupholder ready to explode scalding hot water or espresso on me if something went wrong. Plus, although the pods also aren’t free (you can get an 18 pack on Amazon for $16.99, so a little less than $1 per cup), it’s still cheaper than Dunkin Donuts and way cheaper than hitting Starbucks every day. 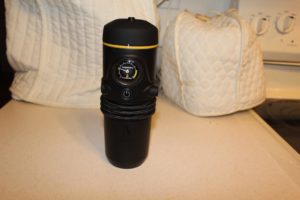 Being someone who likes caffeine but dislikes coffee, my options are limited, so will likely continue to use the Handpresso Auto for those mornings when I need a jolt before lunchtime and I don’t want to be a weirdo that drinks soda in the morning.

If you’re smarter than me and can figure out a practical, safe way to use this thing in the car (other than sitting in your driveway for five minutes in a cold or hot car before you leave for work), then I highly recommend the Handpresso Auto. If, like me, you like everything about the Handpresso Auto except for the “auto” part and think that espresso brewing has no place in a car, you may want to consider a home espresso maker instead. The last time I used the Handpresso Auto before this review, I added the water and flavor pod the night before, then when I went downstairs for breakfast the next morning, I plugged it into the car (the garage is adjacent to my kitchen and my Cadillac CTS has always-on 12 volt outlets) while I poured my cereal, then retrieved the Handpresso Auto and poured my latte in the kitchen.

Or, I could have just stopped at Dunkin Donuts.

Handpresso provided a Handpresso Auto and three boxes of espresso pods for the purpose of this review.