Apparently, Lexus is tired of its reputation as the purveyor of cushy, soft luxury cars.  Some buyers really do put a priority over comfort – not to stereotype, but they are typically older buyers.  If you believe the marketing of Cadillac, BMW, Mercedes-Benz, and Audi, however, nobody wants to buy a luxury car without sporting credentials.  Lexus’ response?  Offer an F Sport variant of its big LS 460.  Don’t fret, fans of comfy Lexuses – this big boy still offers plenty of comfort.  And cush.

Updated for 2013, the Lexus LS glides into the modern luxury-car realm with the addition of Lexus’ mouse-like infotainment controller and a giant, high-resolution, widescreen display high and prominent in the center of the dash similar to what Lexus installs in the GS.  Lexus kept the hard points the same in the LS refresh – so the windows, doors, and roof are all the same as they have been since 2006.  But the updated LS gets the now-ubiquitous Lexus spindle grille, the mandatory (in luxury cars) LED daytime running lights, and (in the case of the F Sport model) adding a sportier appearance.

Lexus has tried infusing the LS with sport before.  I reviewed a 2010 LS 460 Sport (note the lack of an “F” in the name) and really, really liked that car.  It’s also nearly impossible to find a used one.  I know.  I tried.  The 2010 LS 460 Sport was a big guy who could hustle, and its 19 inch wheels shod with summer tires, and my tester’s rear wheel drive gave it more horsepower than this two-years-newer F Sport model.

The upgraded technology in the 2013 LS is certainly nice to have.  Gone are the frustrations in Bluetooth pairing that I experienced in the 2010 model (where the car didn’t take kindly to pairing with a smartphone that was both a media player and phone); I had no such problems in this car.  The giant (12.3″), high-definition widescreen display mounted high in the center of the dash is easy to read and very informative.  Unfortunately, you have to take the good with the bad, and the former touchscreen interface has been ditched in favor of the Lexus Remote Touch computer mouse-like controller.  The new system keeps fingerprints off of the giant display, but also makes destination entry a tedious, attention-stealing task.  The workaround is to use voice controls, which work very well.

My tester was equipped with the 19-speaker Mark Levinson audio system.  For a reasonable $1,580 charge, you get navigation, the Mark Levinson audio system with 7.1 channel architecture, XM NavTraffic, DVD/CD player, Lexus Enform with Destination Assist).  It’s far cheaper than the pricey Bang & Olufsen system that’s optional in Audis and BMWs, which makes it well worth the extra money if you’re going to drop $80k on a new car anyway.  Basses are strong and trebles are clear; there’s not much more that I ask for from a premium audio system.

The Lexus LS is a supremely comfortable car.  I feel like I could quite easily slip into the driver’s seat and drive across the country, stopping only for gas, restrooms, and meals.  Maybe I’d eventually get tired, but I bet I could make it from eastern Pennsylvania to Iowa before that happened.  It’s so quiet, and the suspension is so compliant, and the seats are so comfortable, it’s hard not to love it.

But, not to be a hack “Lexus isn’t fun to drive” writer, this car is not as fun to drive as it could be.  I may not have the most highly-calibrated rear end, but it felt slower than the last LS 460 that I drove (the Sport model – not an F Sport like this one).  Indeed, I eventually looked more closely and noted that this particular test car was an all wheel drive model; that increases foul-weather utility but also decreases horsepower, by a fairly sizable 26 horsepower margin (RWD models are rated at 386 horsepower; AWD models get just 360).  There’s plenty of off-the-line thrust from the silky-smooth 4.6 liter V8, but it feels like it loses its momentum at higher speeds.  BMW bestows the 750i with a turbocharged 4.4 liter V8 rated at 445 horsepower (though the 7er also costs about $10,000 more than the LS), but Audi and Mercedes-Benz also out-power their Japanese competitor.

When I tested the 2010 LS 460 Sport, I felt that power was adequate, so my guess is that the additional weight of the all wheel drive hardware, coupled with the horsepower deficit, is causing the LS 460 F Sport AWD to feel a bit slower.

The LS 460 F Sport comes with lowered Adaptive Variable Air Suspension.  Though several premium cars offer air suspension (which can regulate both ride height and suspension compliance via an air bladder on each corner of the car) and it may sound fine on paper, the LS 460 F Sport never feels quite as planted as a two-plus ton full-size luxury sedan with sporting intentions might; employing magnetorheological shocks as GM and Audi (among others) do might have done a better job of delivering the best of both worlds – firmness when needed, comfort and compliance when not needed.  The 2010 LS 460 Sport that I pined for during the past few years did not have air suspension, and instead enjoyed conventional suspension that was tuned for greater handling prowess.  The LS 460 F Sport’s suspension adjusts via the drive mode controller, which has Eco, Comfort, Sport, and Sport+ settings that all affect powertrain (specifically shift points), steering, and suspension.  There’s also a Normal mode that leaves everything, well, normal.  But even in Sport+ mode, the LS never felt quite as buttoned down as the smaller GS F Sport does.

Despite the question marks about handling, the F Sport’s brakes do the ‘sport’ name proud.  You can thank the F Sport’s standard Brembo kit, with its 14.8 inch, six-piston front discs.  Pedal feel is firm and stops are sure.  As a reader of a car blog, you’re no doubt aware that tires are very important to braking performance; the F Sport’s V-rated summer tires are up to the task of accelerating, stopping, and changing direction.  The car’s weight, plus its all wheel drive hardware and relatively light power rating meant that it was almost impossible to do any kind of burnout, even for a few feet.

Fuel economy from the big guy was a pleasant surprise, at least relative to the car’s paltry EPA ratings of 16 MPG city/23 MPG highway/18 MPG combined.  My 2008 CTS, which is a smaller, lighter car with a smaller engine, gets about the same 20 MPG combined that I observed in the LS 460 F Sport.  BMW’s much more powerful 750i xDrive gets an extra MPG on the highway (24) and combined (19), while the similarly-powerful 740iL xDrive is rated at 19/28/22 – that’s about 20 percent more efficient than the LS.  Of course, given the Lexus’ price advantage, coupled with better anticipated reliability and what will almost certainly have less-expensive maintenance requirements after the warranty period, you could pay for a lot of fuel.

The LS 460 AWD starts at $74,935.  To create an F Sport from that base price, you need the $7,860 F Sport package (which adds 19″ 10-spoke forged alloy wheels, F Sport-tuned lowered Adaptive Variable Air Suspension, stabilizers, and shock absorbers, Brembo six-piston brakes with 14.8-inch ventilated discs, F Sport bolstered seatbacks, black Alcantara headliner, aluminum pedals and interior trim (not fake aluminum, either), F Sport steering wheel with paddle shifters, F Sport exterior styling elements).  The asking price for the F Sport option is $1,675 more than the 2010 Sport package option was, but with the F Sport you’re getting air suspension (which is not a win in my opinion) and more visual kit (also not necessarily a win, since it dashes any hope of driving a Q-ship with any subtlety).  Other options on the test car were the $2,090 F Sport comfort package (auto climate control front seats, heated rear outboard seats, pushbutton-close trunk), the $1,450 LED headlamps (which look very cool), and the $1,580 Mark Levinson stereo.  Throw in the $250 trunk mat/cargo net and $895 destination charge, and you arrive at an as-tested price of $89,560.  The 2010 LS 460 Sport, which was RWD and not AWD, but which I liked more, had an MSRP of $76,714.  That’s a pretty healthy price increase.  Your best bet may be to look for a used 2010 model, because the darn things will last forever anyway.

I liked the big LS, and if its highway fuel economy were a bit better, it would be one of the best long-distance tourers of all time.  But Lexus needs to figure out a way to boost the LS’ power and fuel economy to make the car more appealing.  Actually, this car’s competitors have figured out the answer to that riddle:  forced induction.  Lexus is basically the only holdout among top premium brands that have not turned to supercharging or turbocharging (most likely for durability/reliability reasons), but that reluctance is putting their cars at a disadvantage.

Lexus provided the vehicle, insurance, and a tank of fuel for this review. 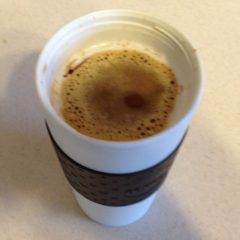