We’ve thrown a few barbs at Cadillac over the years for the brand’s slippage from the true Standard of the World to a brand that eventually sold a barely-upgraded version of the lousy Chevrolet Cavalier during the 1980s.  Cadillac is in a better place today than it has been in decades, but it’s still a luxury-brand als0-ran.  The 2008-2013 CTS helped, and the ATS is a credible entry-level offering, but to really take on the world’s best, it needs more than a midsize 5 Series competitor.

To that end, Cadillac has been rumored for years to be working on a true flagship product – one that shatters old perceptions of tacky chrome, V-8-6-4 engines, and the Cimarron.  And here we are, a decade after Cadillac first showed its stunning Sixteen concept (you know, the one with a 1,000 horsepower V-16 under its elongated hood), and it turns out that the notion of making a car like that is basically no closer to reality than it was in 2003.

Had the Sixteen been actually converted to a production car, it would have had three major issues.  One, I can’t even begin to tell you just how politically incorrect a 16 cylinder car is in today’s world of ever more strict emission and fuel economy requirements.  Everyone else is downsizing their engines (and I’ll remind you that Cadillac has no V8 sedans outside of the soon-to-be-mothballed CTS-V), so suddenly having a V-16 car would be a curious choice.  Two, the car would be extraordinarily expensive.  Twice as much as a loaded CTS?  Try four times as much, at least.  Three, the lineup just isn’t ready for a big-buck flagship like the Sixteen.  Like it or not, the most expensive Cadillac is currently the Escalade Hybrid Platinum (just a bit more than the Escalade ESV Platinum), at about $88,000 fully loaded.  That is too expensive for what you get – and it’s still not anywhere near the same planet as the Sixteen would have been.

The good news is, Cadillac’s brand stewards have realized that before an ultra-luxury halo car can be credibly offered, it needs to take the next step after the 5 Series-fighting CTS, and offer a full-size luxury car that competes with the 7 Series.  Note, I didn’t say that they need to compete with the Mercedes-Benz S-Class, which is generally acknowledged as the finest (and best-selling) full-size premium sedan.  Baby steps, folks.

Cadillac will not be selling many $60,000 to $80,000 (or more) 7 Series fighting sedans when that car finally debuts in 2016 (on a new, large rear wheel drive platform called Omega).  But it would have sold even fewer of an ultra-luxury $100,000-plus model.  The ultra-luxury Maybach died and Daimler decided to replace that car with an even more premium trim level (S600 Pullman) on the S-Class; so why wouldn’t Cadillac do something similar?

Aside from creating a Bentley Continental competitor, there’s another kind of halo car that Cadillac could produce.  Back in 2002, Cadillac showed the Cien, a mid-engine supercar concept, which was powered by a 7.5 liter V-12.  With the discussion every few years about whether the Chevrolet Corvette should switch from a front engine/rear drive layout to a mid-engine layout (like the Audi R8), moving such a car – which would cost quite a bit more than the Corvette does currently.  But that extra cost would be more palatable as a Cadillac than as a Chevrolet.  You’ll note that the R8 is an Audi, not a Volkswagen or Seat, after all.

GM Tops J.D. Power IQS Thanks To Old Cars and Not... 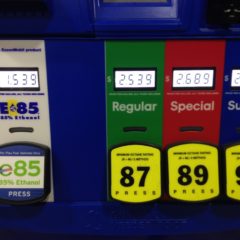