Here at Full Metal Autos, we spend far too much time talking about cars that are self-propelled.  But what about ones that are gravity-propelled?  It’s about time that we investigated gravity as an automotive fuel; after all, gravity is even more constant than wind, water, sunlight, or other alternative energy sources.  For this reason, we built a Pinewood Derby car as a proof of concept.  If this one is successful, we’ll consider producing a full-size mock-up.

My seven year old son is in the middle of his first year of Cub Scouts.  He loves going to meetings and activities with his friends, and he could not wait for the Pinewood Derby.  His pack’s derby was scheduled for mid-February when we were planning to be out of town on vacation, but fortunately, the event was moved to the week after we returned.  So he could build a car after all.

This got me to thinking, though – if we just built ramps everywhere, cars wouldn’t need powertrains – just brakes.  And with felt bumpers at all destinations, they might not need brakes.  Throw in a track that controls the car’s direction, and you may not even need steering wheels.  Think of all the energy to be saved!

So the same night that my son started work on his official Pinewood Derby car, I began my own, a lead sled tribute design that would be painted in high-gloss black, be far heavier (and theoretically faster) than the lighter-weight kids’ cars.  The day of the official Pinewood Derby race was to be the debut of my own proof-of-concept.

First, my car didn’t win.  Its heavy weight (about 7.5 ounces) meant slower off-the-line acceleration but a higher top speed.  Once rolling, though, its high-speed acceleration – passing, if you will – was excellent.  On the 1974-vintage wooden track, the car traveled smoothly.  Ride quality was excellent, though the suspension did not seem to be particularly compliant.  Braking at the end of the track was immediate; the car did not have any issues stopping on a dime, yet sustained no damage until post-Pinewood Derby testing on the Haak family deck.  Below are the full battery of test results:

Exterior:  8/10
I’m thrilled with the way the paint turned out; two coats of primer, two coats of black, then re-doing the entire thing again after I had to drill holes throughout the body to add weights.  The result was a mirror-like black finish, cool stripe job, and sweet teardrop shape.  The only problem?  There’s no shape to the hood, and the tumblehome is just non-existent in the car’s slab-sided shape.  I’ll do better next time.

Interior:  0/10
It doesn’t have an interior (it’s either wood, putty, or weights inside the car), so it’s hard to earn any points here.

Braking:  10/10
The test car stopped immediately at the end of the track upon hitting the foam barrier.  Can’t ask for more than that.

Ride Quality:  8/10
The only thing that kept the Pinewood Derby car from a perfect score were its hard plastic wheels on a painted wooden track, with no suspension to speak of.  For some reason

Handling:  10/10
The car handled like it was on rails.  Granted, it was on a wooden track that kind of kept it from going astray, but it tracked straight and true.

Top Speed:  8/10
As the car picked up speed, its weight became an advantage.  Note from the video the way the car moved from 3rd to 2nd place toward the end of its run.

Noise/Vibration/Harshness:  5/10
There isn’t really an interior to speak of, but I would imagine that the plastic-on-wood wheel-to-surface issue would make quite a bit of noise.  Plus, the lack of suspension keeps things a little rough.  Wind noise was a bit of an issue, having no true cockpit for the driver.

Toys:  10/10
How could something that is a toy be given anything but a 10/10 in this category?  Who needs a navigation system, streaming audio, adaptive cruise control, airbags, etc. when you have the sweet smell of fresh wood and paint, coupled with the symphonic sound of plastic wheels reminding you just how fast your car might be.

The Pinewood Derby car didn’t disappoint.  We’re now hard at work in the Full Metal Autos Garage building a larger prototype, this time with an actual interior. Stay tuned for next April 1 when we just may have more to report. 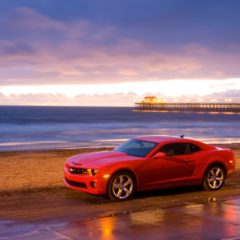