Did you ever have a friend who is a lot of fun in small doses, but after an extended period, their presence starts to wear on you?  That’s kind of how I usually feel about small, underpowered cars.  I enjoy the maneuverability and economy of them, and feel that it’s something of a novelty to drive something as small as a Scion iQ or a Fiat 500.  Yet, I often find myself requesting small cars to evaluate.  So, despite owning a nearly two ton, 304 horsepower sedan as my daily driver, this is the third Fiat 500 I’ve borrowed for a week.  (First, I had the Fiat 500C, then I had the Fiat 500 Sport.  And now, the Fiat 500 ABARTH.)  It was fun to spend a week using the ABARTH, but I could never live with a car this small as a daily driver.

Aside from the general shape and interior layout, the transformation from the mild-mannered Fiat 500 to the rip-snorting Fiat 500 ABARTH is fairly extensive.  Most obviously, there’s a huge power boost from the Garrett turbocharger, which jacks the 1.4 liter four cylinder’s output from 100 horsepower to 160 (and gets the ABARTH 170 lb-ft of torque).  There are also suspension improvements, more supportive front bucket seats, a boost gauge, larger wheels, and performance tires.  Also, there’s an ABARTH-specific decal kit applied to this model, plus no fewer than eight scorpion graphics (counted by my four year old animal loving son) on the outside, and one on the horn button and one on the engine cover.

It was a bit of a re-calibration for me to jump from the 580 horsepower, two ton Camaro ZL1 to the Fiat 500 ABARTH.  I mean, Ilost420 horsepower in a single day.  However, along with the lost horsepower, I also lost 1,377 pounds and more than half of the Camaro’s price. I also lost a cog in the gearbox:  the Fiat only has five forward ratios to the Camaro’s six.  But this is all beside the point:  exactly zero people will cross-shop a ZL1 and Fiat 500 ABARTH.

Once I re-calibrated myself to a lack of low-end torque (and some turbo lag), it really was fun to drive the Fiat during my normal daily commute.  Because I knew my family would fit in the car, I decided not to torture them with any weekend errands, though my sons did fit just fine individually in the back seat for quick trips across town in their booster seats.

The ABARTH treatment does not really help the bolt-upright driving position that all 500s suffer.  It’s a short, tall little thing.  Once you’ve come to accept that, though, it’s really not that bad.  I think a larger issue for long-trip comfort would be the somewhat droning engine note at 3,000 RPM around 70 MPH.  That’s one of the hazards of having only a five speed.  On the other hand, after a brief turbo lag, the ABARTH can actually change speeds without downshifting, unlike the 1.4 T installed in the Chevy Cruze Eco, for instance.

Though at first glance, it may seem that the only changes made to the Fiat 500 to create the ABARTH are graphics and the turbo engine, there nearly every part that could increase the car’s performance has been upgraded.  For instance, there’s a TTC (torque transfer control) system that maximizes cornering grip and, together with equal-length half shafts, basically eliminates torque steer.  The lack of torque steer compared to other front wheel drive performance cars (ahem, Mazdaspeed 3) is remarkable.

The five speed manual is upgraded to heavy-duty spec to deal with the extra power and more aggressive shifting that typically would accompany a performance car.  The lightweight 17 inch wheels and 205/40R17 summer tires reduce unsprung weight and grip strongly, at least when the ambient temperature is above 45 degrees Fahrenheit.

Chassis upgrades bestowed upon the 500 by Chrysler’s SRT engineers are also numerous.  Front spring rates are 40 percent stiffer, while rears are 20 percent stiffer than the standard 500.  The front gets KONI shock absorbers as well, and the rear gets a reinforced axle and ABARTH-specific stabilizer bar.  The ride height is lowered by 15 mm.  SRT engineers re-calibrated the steering to be 10 percent quicker, which almost fully addresses my biggest dynamic criticism of the standard 500 – its complete lack of steering feel and feedback.  Finally, the brakes in the ABARTH are up-sized to 11.1 inch front rotors for improved stopping power and fade resistance.

It really is a shame that the performance teams like SRT and SVT, and the like aren’t allowed to get their hands on every new car during development.  I have been consistently impressed by the way these go-fast experts have been able to take what are pretty average-driving cars and turn them into thoroughly enjoyable legitimate performance machines. Everything works so well together.  There isn’t one particular component that stands out as a weak spot (or as a particularly strong spot).  The brakes are well-matched with the car’s power levels, steering upgrades make the car’s handling direct and communicative, and the exhaust provides the perfect accompaniment for performance driving.

While the 500 ABARTH was in the Full Metal Autos Garage, I downloaded Asphalt Heat 7, a game for iOS that works on both iPhone and iPad.  I was very amused to see that this exact car was the first one that you drive as you begin the game (long before you get to the good stuff like the Lamborghini Aventador LP 700-4); I immediately “repainted” it in the game from white to black.  I think you’ll like the result.

If video games aren’t quite your speed, there’s always the real thing.  If you buy a new 2013 Fiat 500 ABARTH, included in the price is a one-day ABARTH Track Experience, which gives the ABARTH owner professional driving instruction in a safe, controlled environment.  The Corvette ZR1 offers its buyers something similar.

Now, all is not roses.  Despite the car being an absolute hoot to drive (as long as you keep RPM up and momentum moving), ride quality is a bit harsh on imperfect pavement.  The steering, though dramatically improved, still lacks some feedback (it’s electric, boogie woogie woogie).  The exhaust tends to drone at highway speeds (remember, 3000 RPM at 70 MPH in 5th gear, plus loud exhaust).

There’s also the interior.  There are nice upgrades vs. the standard 500.  The seats have integrated headrests and very good bolstering, but lack somewhat in lumbar support.  It didn’t bother me all that much, but it may bother some folks.  There’s still a ton of plastic at the car’s touch points, but at least the instrument hood is covered in imitation leather.

Though ergonomics are a bit less quirky than the Mini’s function-follows-form approach, they’re still quirky.  I mentioned before that this is the third 500 I’ve had for a week.  Yet I’m embarrassed to say that it took until day four of my seven days with the car before I found the button to change the trip computer display.  (It’s hidden in plain sight on the end of the wiper stalk.  The owner’s manual was not particularly helpful.)  Automatic single-zone (hey, it’s a small car) climate control worked well and is much easier to manage than manual controls are.

Fiat includes a seven speaker Bose stereo in all ABARTHs.  It’s not bad, considering its small size (there’s an tiny subwoofer in the cargo area taking up a bit of precious real estate there).  Naturally, given the small size of the sub, deep bass is not its strong suit.  Other than that, sound quality is very good, with clarity and strong treble.

This car is equipped with a navigation system, though I almost never used it.  You see taking a page from Suzuki’s playbook, Fiat fitted it with what is basically an aftermarket TomTom unit (ahem, TomTom Navigation with BLUE&ME by Mopar) that has a docking port atop the dash, just to the right of the instrument panel.  The theory is that you can remove the unit and stow it in the glovebox when parking in questionable areas.  It’s is integrated with the audio system and Bluetooth handsfree interface, but also can be controlled via steering wheel buttons and has the smarts to lower the radio volume when giving spoken directions.  I’m partial to Garmin software as a navigation solution, but this TomTom unit worked fine.  The upside is that navigation is only a $400 option in the 500; though not confirmed, it seems that map updates (at a minimum) and device upgrades would be theoretical possibilities with a unit of this nature.

One nice thing about a four cylinder performance car:  they’re pretty easy on your wallet at the gas pump.  The ABARTH will happily run all day on 87 octane regular, but 91 octane premium is recommended for on-track or extreme hot weather conditions.  I used premium in it, just so the next person to drive it is getting its maximum performance.  Over a week of mixed driving, I saw about 31 miles per gallon.  The EPA rates it at 28 city/34 highway, which is decent considering its fun quotient.  Though that highway number is just a bit higher than some tall-geared sporty cars like the Camaro or Mustang, the strong city number is where it’s at as far as true efficiency in all conditions.

You can buy an ABARTH of your own for $22,000 (plus $700 destination charge).  Our tester added $1,000 high-back leather trimmed front buckets, $750 safety and convenience package (auto climate control, Sirius satellite radio), $350 rosso (red) seats, $400 navigation, and $1,000 17 inch aluminum wheels.  The total MSRP was $26,200.  Considering that you can get a poverty-spec 500 for about $10,000 less, that sounds like a lot, but you’re getting a lot of performance parts in that price.  The there’s the fact that a comparably-equipped (and performing) MINI Cooper JCW is about 50% more expensive, and you see what a reasonable asking price that is.

I’d never buy a pipsqueak like this for myself or my family – not enough room or comfort, especially since we’re all tall.  But for a single guy who’s a decade younger than me, this is most certainly not a “cute car” or a “chick car.”  It’s a bona-fide performance car that is very fun to drive, has some exclusivity, and won’t bust your budget with monthly payments or at the gas pumps.  In today’s economy, that might be a winning combination.

Below, we have embedded a video from Full Metal Autos’s YouTube channel in which we take this car for a brief spin on the track at Monticello Motor Club.

Fiat provided the vehicle, insurance, and a tank of gas for this review. 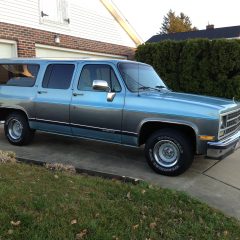