That Essence Rare, or Memories of a Car Guy

What exactly is it about certain cars (or trucks) that allow them to embed themselves in our hearts and minds, regardless of logic or utility? By my count, I’ve owned or been in possession of 28 cars in the 20 or so years I’ve had a driver’s license. In my back roads, I’ve had Clint, Lee Van Cleef and Eli Wallach. But there are only a few that have truly wormed their way into my heart. At least one of them—a 1976 Buick Electra 225—I still dream about occasionally. Literally—I have had dreams of driving that car many times in the 18 years since we parted ways.

I find that many, although not all, of the cars that have endeared themselves to me have been cursed by tragic flaws, typically costing time, money and heartache. And many of the ones I still think about slipped through my hands in the space of a few months.

Perhaps it goes back to childhood. My dad was and still is a confirmed car addict. A real gearhead. Despite working 30 years at GM, not all the cars he owned were GM models. Back in the early 70’s, he owned a Datsun pick-up—probably the only autoworker in Michigan that owned one. He bought it new and only drove it a few years. I don’t even know if he had it while I was alive; I certainly don’t remember it. But I do remember the two or three 240Zs he had in the 70s. Sometimes he will rhapsodically recall the motorcycle like wind-up of the straight six, rev happy in a way that few cars were at the time. This is quickly followed by him slowly shaking his head and cursing the rust that caused most of the 70s Z cars to dissolve back into the ground.

I also recall the 1965 Stingray he had in 1978. A charcoal gray convertible, 327, with side pipes. I think he paid $2,500 for it. He sold it after a year. I touched the side pipes after a drive once and burnt my hand. I vaguely remember the all-out excitement of being a passenger, illegally sitting on my older brother’s lap, with the top down flying down I-496 through Lansing. Times were good; people couldn’t get enough Cutlass Supremes and the plants in Lansing were cranking them out in three shifts a day.

He also owned a succession of old hot rods in various stages of disrepair. A 1938 Dodge, a 1946 Ford, a 30s Plymouth. Once, when I was a kid, he saw a 1955 Chevy coupe across the street. It belonged to a guest of one of the neighbors. He bought it on the spot—and it wasn’t even for sale. He didn’t have that one for long either.

And there were vans. Several of them—well, it was the 70s—mostly Fords. In 1976 he bought a brand new Dodge van. We took it on a trip across the Mackinac Bridge into the Upper Peninsula. And the transmission gave out. It was only a few months old. He quickly switched to Ford vans.

I also fondly recall the 1972 Cadillac he had in the early 80s, back when they practically gave those barges away. It probably got eight miles per gallon on a good day. It had every gadget and gizmo in the GM catalogue and was a far cry from the 1980 Chevy Monza that was his daily driver. He’d let my older brother drive it up and down the driveway, chirping tires and screeching to a halt with the feather-sensitive power brakes.

So I suppose I have my dad to blame for my own penchant for the automobile (and motorcycles—the old man has owned several Hondas over the years). His own obsession also began at a young age. Growing up on a farm, he had a farm permit to drive a pick-up at a very young age. When he was 16, he bought a 442. And six months later, rolled it five or six times at a speed well in excess of the legal limit. Sans seatbelt, he walked away from the accident unharmed.

As for me, I don’t really know what it is about certain cars that captures me so much that I can smell them 20 years later and feel the gas on my bare feet. The 1976 Electra—the Battle Buick, with its emissions-strangled 455, sagging air shocks and anarchy symbol spray-painted on the hood; the 1996 Nissan pick-up that was so stripped it didn’t even have a radio; my first new car, a 1993 Cavalier that I special ordered with AC, rear defrost, passenger door mirror and radio delete. And let’s not forget the 1981 Citation, with peeling green paint, that required a Coca-Cola bottle to start—really—and whose transmission ultimately only worked in reverse.

We all have memories of cars from our past – and sometimes memories of those cars are probably far more positive than the actual experience with the cars may have been. Still, sometimes it’s fun to keep driving those now-classic cars of our younger days in our memories – or our dreams. 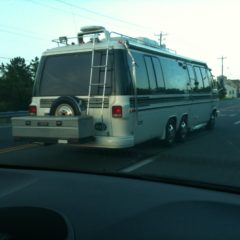