When I tell most people that I used to own a 1993 Oldsmobile Achieva SCX, I typically get one of two reactions.  Either they have never heard of the car before, or they have heard of the car and think that I immediately lose all credibility as a gearhead for having owned a car as lousy as the Achieva.

On the lack of name recognition, I’ll attribute that to a combination of GM’s propensity to rename the next generation of a model rather than just, you know, improving it (the Cutlass Calais begat the Achieva, which begat the Alero, which was the last Oldsmobile ever produced), and the fact that on the whole, the Achieva was a forgettable car with a stupid name.  My explanation to this group is usually something like, “it was the Oldsmobile version of the Pontiac Grand Am, but with a nicer interior and a Groucho Marx face.” 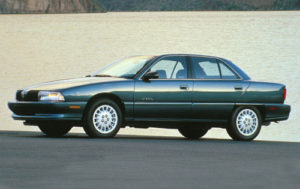 For the people who have heard of Achievas, they picture the geriatric four-door models with a 120-horsepower “Quad OHC” four cylinder coupled to a three-speed (or four-speed if you’re lucky) automatic, plastic wheel covers, and a foolishly ugly rear wheel opening shape.  My explanation to these folks is usually, “not that kind of Achieva – mine was a two-door, five-speed, 185-horsepower homologation of a showroom stock race car.”

Indeed, the SCX was an interesting car that GM in its current state would never build, even if Oldsmobile still existed.  The Achieva SCX was produced only during the 1992 and 1993 model years, and in a hat-tip to the days when each GM division built its own engines, the SCX had a special version of the Oldsmobile-developed Quad 4 called the W41 that had a different cam profile, higher (7,000 RPM) redline, and lower restriction exhaust that produced an additional 10 horsepower over the “regular” high output Quad 4.  Today, there is no such thing as a “Buick engine” (though the recently-departed 3800 V6 certainly is a Buick engine) or a “Chevy engine” (though the 60 degree V6 in the Impala and a few other cars, plus the Small Block V8 trace their roots back to the Chevrolet division of GM).  The 2.3-liter W41 Quad 4, which had a red IDI (integrated direct ignition) cover that said, “W41 – Manufactured exclusively for Oldsmobile by General Motors” instead of the normal black anodized aluminum version of the regular H.O., produced 190 horsepower in the 1992 SCX and 185 horsepower in my 1993 SCX. 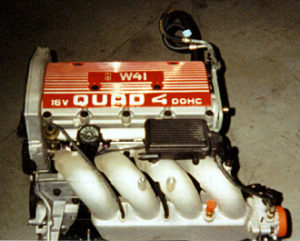 Oldsmobile had used the W41 engine in a special version of the previous-generation Cutlass Calais Quad 442 sold in 1990 and 1991 (I’m sure that fans of the original Olds 4-4-2s wanted to pull their hair out upon seeing a front wheel drive 1990 Cutlass Calais with their beloved name on the side, based on the way the GTO faithful reacted to a tamely-styled, yet still V8 rear wheel drive reincarnation of that famous nameplate a decade later).  When the Calais bowed out in favor of the Achieva for the 1992 model year, the Achieva SCX took the mantle of the highest-performance Oldsmobile N-body car (actually, it was the highest performance Oldsmobile period in the 1990s).

Some of the exclusive features that set the Achieva SCX apart from the more pedestrian Achieva SC as well as its corporate cousins that shared the same platform were:

I acquired my red 1993 SCX – which I’d later learn was one of about only 500 1993 SCXs produced – in early 1994 with less than 5,000 miles on the clock, and was the car’s second owner.  I owned the car throughout most of my college years, and upon landing my first job, kept the car for about a year until deciding that a noisy, red compact car was not “professional” enough, and upgrading to a 1998 Bravada SUV.

Performance of the SCX was excellent for its day; zero to sixty times were generally in the high 7’s, and quarter mile times were generally in the 15s.  The wider rear track and grippy BF Goodrich tires really helped handling, and the steering wheel had a thick rim and nice organic shape.  While the brakes weren’t upgraded from the standard Achieva, meaning that it had front discs and rear drums (larger brakes probably wouldn’t have fit inside those puny wheels anyway!), ABS was standard and braking performance was far better than that of GM cars made in the previous few years.  The gearshift was connected to the Getrag-sourced five-speed manual by cables, and the linkage was very notchy and certainly not up to contemporary expectations.  On cold days, it was even worse.  Reverse gear was not synchronized, meaning that you had to come to a complete stop and either put the car into a forward gear first, or wait a few seconds before engaging reverse.

The low-restriction exhaust and a Quad 4 made for a very noisy combination.  I wish I had a nickel for every time someone asked me if I had a problem with my exhaust system, but in fact, it kept the same high noise level from the first day I drove the car.  When I was sneaking home late at night after stretching my curfew a little far, I had to cruise down the block past my parents’ house, do a U-turn, then shut off the engine and coast to a stop in front of the house to not tip them off that I was coming back so late.

While the exhaust was noisy, it didn’t have the artificial unmuffled note that a Civic with a coffee can muffler does today.  Being a four cylinder, true dual exhaust was of course not possible, so a single pipe came from the exhaust manifold to a muffler on the left-rear of the car, then a pipe exited the front of that muffler, moved across the rear of the car under the trunk, and into a resonator that was half the length of the real muffler.  This made it possible to have two tailpipes that actually emitted exhaust. 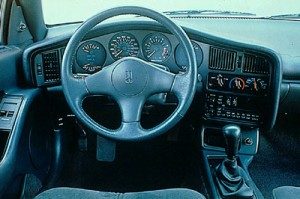 The Achieva had, in my opinion, a nicer interior than did its contemporary platform-mates, the Pontiac Grand Am and Buick Skylark.  Where the Pontiac had shiny hard plastic on its dash, the Achieva had shiny soft plastic.  As you can see from the photo to the right, the gauges were huge and very legible.  Climate and audio controls fell right to hand, and the car had a fairly large glovebox.  The seats were unfortunately quite flat, but since I was in my late teens/early 20s when I owned the car, they never bothered me.

My SCX had a six-speaker stereo with a single-disc CD player that could really kick out some nice sound.  I’m sure I would complain about that stereo today, but I loved it in 1994.  My biggest complaint about the interior was that the car had no airbags, but instead used door-mounted passive restraints.  The theory was that you could just leave the belt buckled at all times, then slide under them when entering the car.  In practice, I just used them as regular seatbelts, but in an accident, there were cases where the door would fly open, and suddenly the occupants aren’t belted to anything.  Later Achieva models had a redesigned dash with dual airbags, and reverted to the more conventional B-pillar mounted belts.  The only positive of the door-mounted belts was that it made rear seat entry pretty easy.

The W41, aside from being noisy and course, was pretty darn quick.  The engine pulled strongly all the way to its 7,000 RPM redline, and seemed to have a flat powerband.  It’s telling that even today, 15 years later, the 2.4 liter Honda Accord does not match the W41’s power output from its 2.3 liters (yet the Accord does so at half the volume and harshness!)  You could hit 60 mph just as second gear was running out of revs.  Aside from the NVH problems that Quad 4 engines had, another reason GM no longer puts them into cars is that nearly every single one has had a head gasket failure.  Some people like me get lucky and get a slow leak that is fairly easily remedied, while others experience catastrophic failure, with antifreeze going everywhere and a lot of smoke billowing from under the hood.  Mine failed around 50,000 miles and was replaced for free under a “secret” GM warranty, in spite of the car being out of its 3 year/36,000 mile factory warranty.

A particularly unique feature I haven’t spoken much about yet was the electronically adjustable suspension.  While I was never able to find details on how this worked (in spite of my best friend’s persistence in asking), it had three pushbuttons on the far left side of the dash marked “Auto,” “Sport,” and “Soft.”  Under the hood, there was no sign of it except for a few small wires going into the strut towers.  I kept it on Auto 99% of the time, but it was definitely possible to feel a difference when the suspension was set to Sport; in that setting, every small bump on the road made its way to the passenger compartment.  I’m guessing that of the surviving Achieva SCXs, very few still have a working electrical suspension.

Of course, I’ve both owned and driven many cars that were more reliable, more powerful, more comfortable, better looking, and more refined than my old Achieva SCX was, but I still have a special place in my heart for that car.  Why is it that a guy who owns a 300 horsepower sport sedan still craves a noisy four cylinder compact car?  I have no idea, but if I had the garage space, time, and money lying around, I’d be all over any opportunity to own another one.  Unfortunately, I have none of the three, so the SCX just has to live in my memories.

Dual-Clutch Gearboxes for the Future?