The second in a series of family hauler reviews

Following my Sienna Limited AWD test drive, I headed to the local Honda dealer to sample an Odyssey EX-L with navigation and DVD entertainment. I was eager to drive the Odyssey, since I had never driven the current generation before, and by reputation and other reviews I’ve read, the Odyssey has a more engaging driving experience than many other family haulers. This particular van was in dark cherry pearl with a tan interior, and was a really attractive van. I found it to be about as attractive as a minivan can be expected to be. The sides are far more sculpted than the Sienna’s, with an interesting character line below the door handles. External panel gaps were tight and consistent, and the doors opened and closed perfectly (“as if on ball bearings,” to paraphrase an old Car and Driver review of the Accord). At this point in my life, I’m not trying to impress anyone with how hip my vehicle looks, so saying the Odyssey is a cool minivan is like saying Brilliance makes good Chinese cars. However, it does have a more modern, attractive shape than its competitors, and not really at the expense of interior volume or usability. The van I drove was a 2008 Odyssey EX-L (the L stands for leather, and is the second-highest trim line behind the Touring model), equipped with satellite navigation, XM radio, and an award-winning overhead DVD entertainment system. The EX-L model comes with standard dual power sliding doors that can be opened via the key fob remote, but the rear cargo hatch is manual (it’s powered on the Touring model). The navigation screen is large and easy to read (larger than the Sienna’s), and can be controlled via touchscreen. The navigation screen also sits high on the dash, which allows the driver to quickly check the screen without taking his eyes off of the road. The problem with screens high in the dash (especially without a cowl around them) is that they tend to be more susceptible to sun glare. I did not experience this, but I know it can be a possibility.

Seating comfort in all three rows was outstanding. Honda really knows how to make comfortable seats. Access to the third row was a little tricky – and would be worse in my particular situation with two car seats in the second row captain’s chairs – but fortunately I’m still young and limber enough to make it to the back between the second row seats. To do this, you have to remove the “PlusOne Seat” (really a mini seat that bumps the seating capacity up to eight) between the second row captain’s chairs and squirm your way to the third row. Third row access can be a little easier if the right side captain’s chair is moved closer to the center of the vehicle, as long as you aren’t concerned about your children being within arm’s length of one another.

All of the controls (radio, HVAC, light switches, etc.) had a consistent, smooth and well-damped feel. Unlike with some vehicles, there was no obvious cost cutting inside the Odyssey. Even the glovebox door and auxiliary audio input jack cover moved smoothly without binding or feeling cheap. I drove the Odyssey – which only had five miles on the odometer – with the salesperson present so he could explain the features to me. The first thing I noticed was how much more planted it felt on the road over the Sienna I had driven 90 minutes earlier. Steering feel was excellent, especially considering that I was driving an eight passenger family hauler with about as much usable interior space as a Chevrolet Suburban. Really, the biggest complement I can pay to the Odyssey is that I felt like I was driving a Honda Accord, only one that weighed over 4,600 pounds and had a higher driving position. In fact, the instrument panel and steering wheel, as well as control placement was almost identical to my 2004 Accord’s. Acceleration was strong – not earth-shattering or as quick as the Sienna – but it had enough power to merge onto the freeway and the 241 horsepower 3.5 liter Honda V6 emitted some of the same sweet sounds I’m used to hearing.

Fuel Economy
The EPA rates the Odyssey EX-L and Touring at 17 miles per gallon city/25 miles per gallon highway. This is tops in the minivan class, and can be partially attributed to the inclusion of Honda’s VCM (Variable Cylinder Management) that can run the engine in three- or four-cylinder mode in low-load conditions to conserve fuel in highway driving. LX and EX models have slightly more horsepower (244) but slightly worse fuel economy.

Pricing
The entry level Odyssey LX starts around $26,500 including destination. An EX-L without navigation or DVD is about $32,800. The DVD player adds about $1,600 to the price, and the navigation and DVD together (the only way to get navigation is in a package with the DVD player) adds $3,600 to the base EX-L price. The top Touring model starts around $has the navigation and DVD player starts around $40,600 and has navigation and the DVD player standard, plus adds Bluetooth functionality, a power cargo door, foglamps, an upgraded stereo, and larger 17″ wheels. The only option available in the Touring model is run-flat tires for $600 (they are standard in all wheel drive Toyota Siennas). Frankly, I don’t think that the $4,200 price difference between a loaded EX-L and base Touring is worth it, and the salesman agreed with me.

The EX-L is practically a bargain for what it is – the interior is very comfortable with high quality, soft-touch materials and a lot of space and flexibility. This is probably the vehicle I’d buy today if all wheel drive was available, but after driving through hard rain last week in a front wheel drive car, my wife and I decided that all wheel drive was the way to go. It’s a shame, too, because the Odyssey is a great van, gets four miles per gallon better on the highway than the Sienna AWD does, and costs a lot less. Honda’s Odyssey is now the best selling minivan in the US, and I can see why that is. 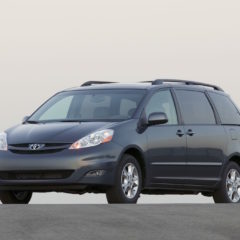