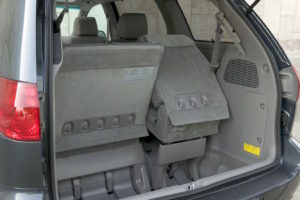 The past few weeks have found me in the market for a larger family hauler – one that can accommodate two child seats and with enough room for one adult over six feet tall (me) and one near six feet tall (my wife). The shopping list included large crossovers (as long as they had more second row legroom than our current SUV did) and minivans.

Last week, I had the opportunity to test a nearly-loaded 2008 Toyota Sienna Limited AWD. The Sienna and the Honda Odyssey, of course, are the 800 pound gorillas of the minivan market. Both vans offer large cabins, dual power sliding doors, stability control, the full complement of airbags, kid-friendly features such as built-in DVD players, and solid reliability ratings. One thing the Sienna offers that its competitors do not, however, is optional all wheel drive. Hyundai, Kia, Chrysler, Honda, and Chevy all offer only front wheel drive minivans for 2008. Living in the Northeast, all wheel drive is nice to have for the occasional snowstorm, and for a more secure ride even in non-icy foul weather.

Exterior
People don’t buy minivans to make a fashion statement; they buy them because they are some of the most space-efficient passenger carrying vehicles in the market. That being said, the Sienna is a pretty boring looking vehicle. It’s a very generic minivan shape without many interesting styling details. The integration of the rearmost side window at the D-pillar with the shape of the taillight has an unfortunate resemblance to the Buick Rendezvous’ similar design. Most trim levels have standard or available alloy wheels, which slightly improves the appearance. Top-of-the-line Limited models have available HID headlamps, which add some spice to the appearance after dark (as well as enhancing the driver’s field of vision). 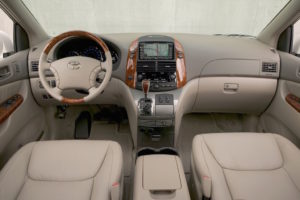 Crossovers have nothing on minivans when it comes to interiors. They can try to replicate the utility and passenger space of a minivan, but inevitably compromises in their design (such as the necessity to have a higher ground clearance and “trucklike” styling, plus non-sliding back doors). Dual sliding doors are opened and closed with buttons on the key fob, as is the rear cargo hatch. The Limited is extremely comfortable inside – in fact, on more than one occasion that afternoon, I referred to the van as the “Lexus of minivans.” Seriously, if Lexus sold a van, it would be very similar to the Sienna Limited, which features such niceties as woodgrain interior trim (although it’s fake), a wood steering wheel, navigation system, leather seats, and more. The styling of the interior was pretty attractive, and most modern minivans like the Sienna feature a third-row seat that folds flat into the floor, but leaves a deep, useful cargo well behind the third row when the seat is not folded.

Also, there was plenty of legroom in all three rows of seats, plus the second row seats could be adjusted fore and aft to accommodate all different sizes of passengers. I found plenty of room for my 6’4″ frame in both the second and third rows. In fact, the third row was far nicer than the third rows in any crossover or SUV I’ve sat in, including the Suburban. Another nice feature is that the console between the front seats can be moved between the second row captain’s chairs so rear seat passengers have an extra spot to store things, or hold a drink. 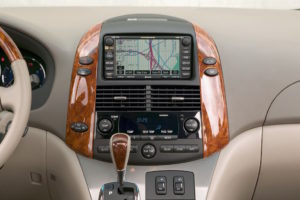 The salesperson at the Toyota dealership made a copy of my driver’s license, stuck a magnetic tag on the van, and sent me on my way. I appreciated having the opportunity to drive the van wherever I wanted to without worrying about whether the salesman wanted me to stay on a designated route.

I found it very easy to find a comfortable seating position. I’m used to driving a Honda Accord and a Nissan Pathfinder, and I felt at home immediately in the Sienna. As I pulled onto the highway, I noticed that there was no wheelspin at all; though the roads were dry, I definitely would have experienced at least the traction control activating in a front wheel drive vehicle in that scenario. Engine power was strong from the 266 horsepower 3.5 liter V6, and the van felt very stable at highway speeds. I hadn’t driven any Toyota in a while, and the common complaint is that they tend to have a less-than-engaging driving experience. I found this to be true, particularly with the steering. It felt very numb and uncommunicative – even worse than the steering in my heavier 2005 Nissan Pathfinder. The other odd thing I noticed about the driving experience was that the transmission seemed to upshift under full throttle at a relatively low (around 4,000 RPM) engine speed. When I encountered that issue, I had been cruising around 25 miles per hour and floored the accelerator. Accelerating on a freeway on-ramp at full throttle did extend the shift point to a higher range.

Pricing
Pricing for the Sienna CE FWD starts around $25,000 including destination; the least expensive AWD model is the LE, which starts around $30,000 but includes far more equipment than the value leader CE. In general, all wheel drive adds about a $2,000 premium over a comparably equipped front wheel drive version. Fully loaded Sienna Limited AWDs start around $40,000 and top out at around $42,000 when all the option boxes are checked off (including navigation, laser cruise control and the aforementioned HID headlamps).

I haven’t yet decided which vehicle I will purchase. On one hand, the Sienna looks great on paper: luxury interior, Toyota reliability, all wheel drive, and plenty of passenger space. On the other hand, while I won’t be its primary driver, the driving experience was not the least bit engaging, and it may be the least attractive minivan on the market (except for the Chevy Uplander). My wife couldn’t care less about its looks and probably about its numb steering, so it might be the right choice for us.