Ford sedan sales may further slow. The company decided to withdraw from the U.S. sedan market as the current generations of the Fiesta, Focus, Fusion, and Taurus reach the end of their life cycles. Ford’s VP of U.S. Marketing, Sales, and Service, Mark LaNeve, said that the automaker is ending nationwide (Tier 1) marketing for the four doomed nameplates. Instead, the company will deploy the money to other vehicles deemed more deserving. These include the Mustang, EcoSport, and next-generation crossovers coming later in 2019.

Ford keeping its powder dry for new vehicles and ongoing nameplates is clearly based on what return it expects to receive. Resources for automakers are anything but unlimited. Automakers notoriously slash marketing expenditures and ramp up incentives as vehicle models progress through their lifecycles. It’s not clear whether incentive spending to clear out unsold sedans offsets the loss of marketing support. LaNeve indicated that the company is content to not grow share in the markets in which the doomed nameplates compete.

Ford accelerated the sedans’ death spiral by publicly announcing the death sentences months – or years – before their discontinuation. Aside from a Blue Oval die-hard, who would want to buy a Ford sedan model that will be discontinued within the next few months?

I’ll miss Ford’s cars, if for no other reason than nostalgia. I was a preteen when the 1986 Taurus debuted, but what’s not to love about this catchy “Taurus – For Us!” commercial at the original Taurus marketing blitz? It’s hard to remember just how much of a leap this car was from its predecessor, the LTD. 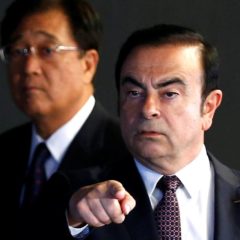 Nissan Will Take a Controlling Stake in