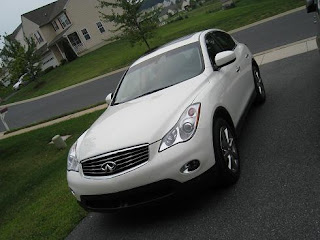 The Infiniti EX35, an all-new vehicle for the 2008 model year, is marketed as a crossover, albeit a carlike one. Infiniti can market the vehicle however they’d like to, but the fact is, the EX35 is somewhere between a wagon and hatchback version of the well-regarded G35 sedan. It does not have the cargo volume, rear seat space, or – thankfully – the ride and handling of a crossover or SUV.

Once you have come to embrace this truth, the EX35 becomes a far more likable vehicle. Where I was initially disappointed with its lack of utility and minuscule cargo area (when the rear seats were not folded), viewing the vehicle with the appropriate perspective allowed me to appreciate the vehicle for what it was on its own, without expectations for what a crossover should be, by some standard definition.

The first thing that you notice when approaching the EX35 is that it sits very low to the ground. When I reached for the chrome door handle the first time, I missed it by about eight inches, because the doors – in fact, the entire vehicle – are lower than you’d expect. The recurring theme, shared with its cousin, the G35 sedan/G37 coupe, is one of flowing curves. The only curve that I found to be unfortunate was the wave at the beltline, only because it was slightly reminiscent of the Hyundai Elantra’s similar beltline wave (and this is likely a coincidence). Otherwise, the styling consists of several very nice touches. My favorite is probably the flat black rocker panels, separated from the Moonlight White paint by a narrow chrome strip. Large nickel-finish aluminum wheels (18 inchers) and low profile tires round out the look. Overall, it’s a fairly uniquely-styled vehicle, and its Infiniti family resemblance is unmistakable. 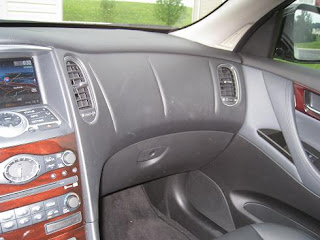 Inside, it’s clear that Infiniti took criticism of the interior design and materials of its earlier-generation models (such as the original G35 sedan) to heart when designing the EX’s living space. Soft touch materials fall to hand everywhere, including the dashboard, door panels, and armrests. Tasteful thin chrome accents abound, such as around the gauges and air vents, and around some controls such as the audio and HVAC knobs. My tester included the optional wood trim package, which put very attractively-stained maple on the interior door panels and console. The underlying theme of the interior, like the exterior, is one of organic shapes; it really works pretty well in the EX.

Infiniti has presumably decided that its definition of luxury means adding nearly every currently-available technological gizmo. That’s fine with me, since I’m a gadget lover by nature, but some technophobes might take issue with some of the electronics included in the EX. These included lane departure warning (which automatically turned itself on each time the car was started, although that aspect can be disabled), lane departure prevention (which taps the brakes on the opposite side of any lane departures to bring the vehicle back into line), laser cruise control, satellite navigation, XM Satellite Radio, and Around View Monitor.

The Around View Monitor is a slick setup, and also appears in Infiniti’s new-for-2009 FX crossover (the EX’s big brother). The system has not only a rear camera, but also a camera beneath the Infiniti logo on the grille, as well as cameras beneath the mirrors. When the EX is put into reverse, two-thirds of the display is the full rear view, while the remaining third is an approximate bird’s eye representation of the EX and its surroundings. It really makes parallel parking and parking between the lines easy. Knowing that I was driving a borrowed car, it also gave me some peace of mind to know that the front camera was there to keep me from dinging the fascia on high curbs.

Infiniti has dramatically improved its navigation systems and interface in the three model years since my family owned a 2005 Pathfinder LE with navigation. The Pathfinder had one input method – a joystick – while the new system has a dial with eight directional buttons, plus touchscreen functionality. I found the dial easier to use while the vehicle was moving (because my outstretched finger tended to bounce with each bump, causing me to miss my target) while the touchscreen was easier to use when stationary. The EX that I tested featured a Bose 11-speaker premium audio system that had two subwoofers, an iPod interface, and CD player. It sounded great, with both excellent detail in the treble range and vibration-free bass reproduction.

Really, my only complaint about the interior was that it was too small, particularly in the back seat. While we did manage to fit two car seats into the back seat, it wasn’t easy, and required sacrificing some front seat comfort to do so. Looking briefly at the specifications, and it’s not hard to see why we had this problem; compared to the G35 sedan on which the EX35 is based, the EX has a 2 inch shorter wheelbase, 3.3 inch greater height, and 0.7 inch greater rear headroom – but gives up 6.2 inches of rear legroom compared to the G35. The EX’s cargo volume is more simliar than you’d expect (though the vehicle is 4.7 inches shorter than the G35 sedan) at 16.8 cubic feet in the EX and 13.5 cubic feet in the EX, but the EX’s seats fold flat into a 47.4 cubic foot cargo area when needed. The rear seats are power folding (and unfolding), but curiously, the rear hatch is solely manual. 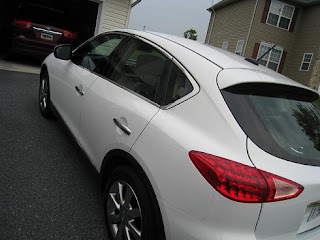 Driving the EX, it’s very easy to forget you’re in a crossover, because you’re not – keep telling yourself, “G35 wagon!” It can be flung into corners with the same confidence you’d fling a sedan, and had zero detectable body roll. The 18 inch wheels and 225/55R18 all-season tires hang onto the road pretty well, and my tester’s all wheel drive further helped in that department. The only transmission available is a five-speed automatic (which could actually use another ratio or two – hopefully Nissan intends to put the 2009 FX/G37’s new seven-speed auto in the EX post-haste), but it’s at least equipped with a good sport mode. My tester did not include steering wheel paddles for upshifts and downshifts, but did have a separate section of the shift gate to bang shifts up or down. And, unlike some performance cars equipped with automatics, the EX lets you keep it in a low gear until it bangs off the rev limiter (which only kicks in at a lofty 7500 RPMs anyway). One of my pet peeves about shiftable automatics is when they upshift at the redine anyway; what’s the point of asking me to manually shift it if it will shift itself anyway? The 3.5 liter V6’s exhaust note is a bit rorty and aggressive, but never droning. Also, 297 horsepower out of a V6 is pretty nice output, especially considering that it’s not using any of the latest tricks like direct injection.

The EX has fairly large four wheel discs; I did not (fortunately) have the need or opportunity to nail any panic stops, particularly repeated ones, but the brakes bit hard (in fact, they felt a little grabby at first, until I got used to them) and brought the fun to an abrupt halt. The steering, meanwhile, was accurate and natural-feeling (no electric power steering here, thank goodness), although some might find it a bit too high-effort for their taste. I prefer firm – not harsh – suspension, and the EX gave me what, to me, would be exactly the balance between control and compliance that I’d want in a vehicle I drove every day. Again, some might find it too firm, particularly if they have more fillings in their mouth than I do.

Infiniti offers the EX’s options primarily in packages, and my test vehicle had nearly all of them. On top of the $36,250 base price for an EX35 AWD Journey, my tester had the $1,950 Technology Package (Around View Monitor, Lane Departure Warning/Prevention, and Intelligent Cruise Control), the $2,150 Premium Package (11-speaker Bose system, Bluetooth phone interface, heated seats, and dual-zone automatic climate control), the $1,250 Luxe Style Package (18″ wheels, Xenon HID headlamps, adaptive front lighting), the $2,150 Navigation Package (navigation, 9.3 GB music hard disc, XM NavTraffic, and RearView Monitor), and the $450 Wood Trim. Add a hefty $815 destination charge (yes, it’s coming to the US from Japan, but Chrysler charges no destination charge at all), and the bottom line is an MSRP of $45,015. That pricing is fairly close to a loaded G35x sedan – about $1,200 higher according to TrueDelta.com, when accounting for feature differences.

The EPA says that the EX35 will get 16 mpg in the city and 23 mpg on the highway. I saw similar numbers, with my highway mileage closer to 21 and my combined mileage around 17. The EX35’s ratings are only 1 mpg worse than the G35x sedan’s in the city, with identical highway ratings. The turbo four cylinder in the Acura RDX bests the EX35 by 1 mpg in the city, but is rated at 1 worse mpg on the highway (17/22), so the EX is class competitive. The RDX’s engine has a reputation for being a good one, but it’s also a turbo four instead of a naturally aspirated six, and is down 37 horsepower compared to the EX.

My advice? If the idea of a G35 wagon intrigues you, check out the EX35. It offers much of the excellent driving dynamics that the G35 does, for a similar price, but with the potential of more cargo-carrying flexibility with the rear seats folded. However, if you want an SUV – or even a more traditional crossover – the EX is probably not for you. It’s a car being marketed as a crossover, and that’s not necessarily fair either to its potential buyers or the vehicle itself.