GM and Ford May Collaborate on Powertrains 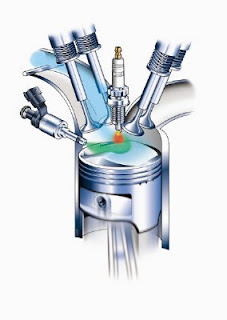 According to yesterday’s Detroit News, GM recently approached its crosstown rival, Ford, about the possibility of developing engines and other powertrain technologies together. According to the article’s unnamed sources, it was GM that made the initial overtures to Ford. After some internal discussions weighing the benefits and costs of collaborating with a competitor, Ford’s Board of Directors authorized negotiations with GM, and high-level executives from the two companies have had several meetings to discuss areas where they might work together.

While it would have been absolutely unheard of several years ago for the fierce rivals to work together on anything, the move is not altogether unprecedented. Ford and GM collaborated on the development of six-speed automatic transmissions a few years ago. Also, of course, GM chose to invite partners to participate in the development (and more importantly, funding) of the two-mode hybrid system. DaimlerChrysler and BMW participated in that project, and this fall, Chrysler LLC is rolling out its first models with the system, the Durango and Aspen full-size SUV hybrids. One interesting offshoot of the GM/Chrysler collaboration on the two-mode project is that the Durango/Aspen and Tahoe/Yukon hybrids will directly compete with one another, and the Silverado/Sierra and Ram hybrids will directly compete with each other, all having basically the same hybrid system. In the case of the Durango and Aspen, Chrysler has decided to attack the Tahoe/Yukon’s weakest point, their price, by undercutting the GM SUVs by several thousand dollars.

In a Ford-GM powertrain collaboration, what could be expected?

Large V8s. Ford has had an on again/off again project for years to develop competitive large-displacement V8s for their trucks. The Boss V8 (nee Hurricane) was to displace 6.2 liters and produce around 400 horsepower, naturally aspirated. The project is up in the air right now thanks to the 35 mpg CAFE rules. Meanwhile, GM happens to have well-regarded small block V8s in mass production that displace 6.2 liters and produce around 400 horsepower. Sure, Henry Ford might be rolling in his grave at the prospect of a Chevy engine in the flagship F-150, but would buyers mind if it gave them the power they need in a large truck without the cost and complexity of a supercharger?

Turbocharging/Direct Injection. Ford plans to quickly push EcoBoost (twin turbocharging plus direct injection) technology throughout its lineup during the next couple of model years. (The accompanying photo is of the EcoBoost system’s inner workings, courtesy of Ford). While GM has the technology, it has not as fully embraced it as Ford has, to where Ford is basically offering engines with two fewer cylinders than normal, but adding DI and a turbo (for example, applications that typically called for a V8, like full-size pickups, would have a twin turbo six cylinder instead, yet still manage better power and efficiency than a conventional V8 could muster). GM could learn a lot from Ford’s EcoBoost R&D, toward the obvious goal of improving fuel economy.

Twin-Clutch Gearboxes. Ford plans to install twin-clutch gearboxes in several of its models in the coming years as another method of improving fuel economy and performance slightly. GM has not announced any DSG-like transmissions. In fact, although the companies collaborated on a six-speed transmission project, Ford is a year or two ahead of GM in offering conventional six-speed automatics in more and more of its models. GM should pay attention to Ford’s research in twin-clutch gearboxes for both fuel economy improvements (perhaps in mainstream midsize sedans) and in performance cars (wouldn’t it be great if the Corvette automatics had a more sophisticated transmission than an automatic with a power-sapping torque converter?)

Hybrids. Ford sells three popular “full hybrid” vehicles (although they’re all basically the same – the Escape, Mariner, and Tribute), while GM’s only full hybrids are full-size SUVs, and soon pickups. Meanwhile, Ford doesn’t offer hybrid powertrains in their large vehicles, and GM is likely licking its chops at the thought of passing some of the two-mode hybrid’s development costs (and building economies of scale more quickly, reducing costs and therefore sale prices or losses endured on the expensive system).

Also, although the much-ballyhooed Chevy Volt range extended electric vehicle is not a hybrid, GM should also license the Volt’s technology to Ford to again more quickly drive up volume and drive down costs so that the company isn’t forced to endure heavy losses subsidizing the Volt or price a compact car (albeit a technically sophisticated one) in the $40,000 range for long.

Of course, the other possibility is that nothing will come from these discussions and Ford and GM will continue to move in their separate directions. However, with both companies literally fighting for their lives – and watching cash burn closely – it seems to make sense for them both to try to maximize their product development dollars and not try to reinvent the wheel – or the V8, as the case may be. Heck, Daimler and BMW are going to start working together on stuff like this, so why not Ford and GM?