There Are Too Many Big Three Dealers

I’ve heard over the past several years that among the many problems the Big Three have, that their dealer count is too large. Basically, there are still nearly as many dealers today as there were years ago when the domestic manufacturers (GM, Ford, and Chrysler) had a stranglehold on the US market, with share above 75%.

The reality today is that amidst falling sales and even faster falling market share, the dealer count is not falling nearly as quickly. The problem then is that there is nearly the same number of dealers fighting for their piece of an ever smaller pie.

I’d known anecdotally that this was a problem, but this past week, I noticed in a supplement to industry publication Automotive News just how pronounced this problem is. The supplement had some data on both the number of franchises for each vehicle brand in the US – the number of Toyota, Chevy, Dodge, etc. dealers – as well as the average annual sales per store.

The per-franchise sales figures above all include both cars and trucks. If trucks are taken out of the mix, Toyota, Lexus, and Honda remain at the top of the list, with 1,046, 840, and 694 cars sold per franchise, respectively, in 2006. The average Dodge franchise, on the other hand, sold only 111 cars in 2006.

You may ask, “What’s the problem with too many dealers?” Well, for consumers, it could be a good thing, because you’re likely to have more than one dealer fighting for your business, and thus willing to cut a better deal for you. For dealers, though, having other dealers selling the same products just a few miles away from you forces you to either sacrifice profits or sacrifice sales volume. The manufacturer is hurt when the profits are sacrificed (and transaction prices are lowered), that is one factor driving down the residual values of cars sold by too many dealers, which makes it more difficult or costly for buyers to trade in their car and move into a new one. Making it difficult for buyers to purchase your new cars can have an effect on new vehicle sales, which forces lower prices, and continues a vicious cycle.

Do the import brands selling the most cars per franchise have that favorable ratio due to astute management and planning? Not necessarily, though Toyota has recently said that they plan to be cautious about growth in the number of franchises; it’s mostly because these brands are still growing in the US market, so they have been cautiously adding dealerships while they gobble up more and more market share. Meanwhile, the Big Three mostly got to this point because they already saw their sales and market share growth during their golden age of the mid-20th century, and are now shrinking their way to profitability and selling fewer cars, but (due to the extreme costs) unable to quickly reduce their dealership counts to fall more in line with their present situation.

The solution to this problem is not easy, nor is it inexpensive. What dealer wants to give up his or her franchise, after investing into the facilities, training, and advertising necessary to operate a dealership? It cost GM $2 billion to compensate Oldsmobile dealers for the demise of that brand. GM is not willing to make that choice again, so instead has in effect folded Pontiac, GMC, and Buick into a single “channel” – encouraging dealers to sell all three brands side by side. The intended effect is to starve the stand-alone Buick dealers of enough different products (Buick is now down to three models – the LaCrosse and Lucerne sedans, and Enclave crossover; GMC sells only trucks, and Pontiac fills the holes in the lineup that Buick and GMC don’t offer) so that Buick- or Pontiac-exclusive dealers are forced to either sell only a handful of cars, or become part of a combined franchise in one way or another. As of January 2007, there were only 119 Buick-exclusive and 81 Pontiac-exclusive dealers (out of 2,751 and 2,763, respectively), so GM’s “encouragement” may be working. GM, Ford, and Chrysler each have more than 100 fewer dealers at the beginning of 2007 than they did in 2006. Unfortunately, overall all three still saw per-dealer annual sales declines, which means the dealer populations are not dropping quickly enough. 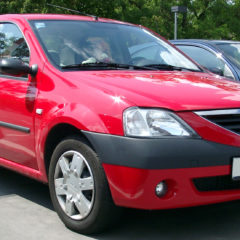 Renault Logan: How to Build a Successful Cheap